Competition in the banking industry is increasing. Each bank seeks to attract people to become its customers. Programs are designed are aimed at diversifying the product, providing a variety of facilities and promising rewards. This effort to prevent migration of customers to other brands and creating customer satisfaction and making customers remain loyal to the brand of banking. In conditions of high competition, the main thing that should be prioritized is to create customer satisfaction and maintain customer loyalty.

PT. Bank Negara Indonesia (Persero) Tbk is one of the state banks that serve customers well. BNI regard customers as an important asset in the banking system. BNI implementing service quality strategy with the overriding goal of profit and can survive in a competitive competition. The products offered are very diverse and are aimed to reach various groups of customers. There are several phenomena that arise in carrying out banking activities such as the lack of response to the BNI to customers. It can be seen from at least checkout counter that operates to serve customers so that customers have to queue for a long time. ATM physical facility that is still less effective and the cleanliness of the physical facilities are not maintained. This becomes a disappointment for customers. It can also be seen in the level of development of the number of customers during 2009 to 2013 in the province of Aceh. 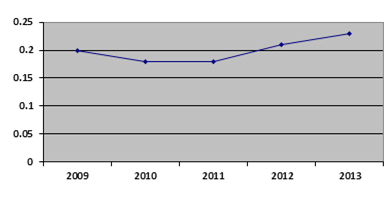 Maintaining customer loyalty is the strategic policy for banking companies because it is part of the company's strategy in the face of competitors and connects companies to the markets. Customer loyalty is needed as an element in a competitive marketing strategy. The success of today’s businesses has become the most important strategic goal because the loyal customers can increase revenues.

Local research specifically on Bank BNI in Indonesia, conducted by Yusmahdi (2013) says that there is significant influence of service quality on customer trust and loyalty while the quality of service did not affect to customer satisfaction. Putra (2012) found that service quality did not affect significant and positive on loyalty of credit borrowers at BNI branch office SKC Malang. The study of Octariani (2008) found that there is a strong and positive relationship between quality of service and satisfaction to customer loyalty. Triyatati (2001) say that the value of the product, the value of service and value of employee and customer satisfaction have is a significant and strong relationship. Bachri et al. (2016) says that the credibility, customer value, satisfaction and loyalty are an important element in improving the performance of banks in Indonesia.

From some research above, there is a gap that can still be researched and contributed to with theoretical perspectives. The authors use the variables quality of service, satisfaction and loyalty of customers at several main branches in the Aceh Province. The variable of quality of services undertaken by previous researchers still do not provide maximum results, meaning that there is no significant effect on results between service quality on customer satisfaction and loyalty (Yusmahdi, 2013; Maiyaki and Sanuri, 2012; Munusamy et at., 2010; Gan et al., 2006).

This research aims to look at the impact of service quality on customer satisfaction and its implication to customer loyalty at PT. BNI Persero in Aceh Province, Indonesia.

Gaspersz (2002) defines quality as the totality of characteristics of a product and services that support the ability to meet specified requirements. Quality is often defined as everything that satisfies customers or conformity to the requirements or needs. Lupiyoadi and Hamdani (2011) say that the service quality has the important essence for the company's strategy to defend them and achieve success in the face of competition.

Parasuraman et al. (1994) stated that the SERVQUAL measurement has more diagnostics and more practical implications to assess the customer perception of service quality for a variety of service industries. The five dimensions of service quality include: (1) tangibles (appearance of physical components); (2) reliability (dependability of service provider and accuracy of performance); (3) responsiveness (promptness and helpfulness); (4) assurance (knowledge and courtesy of employees and their ability to inspire trust and confidence); and (5) empathy (caring, individualized attention the firm gives its customers).

Kotler (2003) defines satisfaction as the feeling of being happy or disappointed as experienced after comparing the perception of performance or the result of a product with expectations. Customer expectations are formed and were based on several factors, including the shopping experience in the past, the opinion of friends and relatives, as well as information and Promises Company and its competitors. Satisfaction can be interpreted as an effort to fulfill something or make something adequate (Tjiptono, 2005). Rangkuti (2004) explains that the meaning of customer satisfaction i.e., the difference between the rate of interest and perceived performance or results.

Oliver (1980) explained that customer satisfaction entails the full meeting of customer expectation of the products and services. If the perceived performance matches or even exceeds customers’ expectations of services, they are satisfied. In the real world, unsatisfied customers tends to create negative word-of-mouth and convey their negative impression to other customers (Newman, 2001). Lupiyoadi and Hamdani (2011) says that the benefits received from measuring customer satisfaction is to increase customer loyalty, prevent rotation / movement of customers, reduce price sensitivity, reduce the cost of marketing failures and operating costs, improve advertising effectiveness and improve business reputation.

Loyalty is the attitude of the customer to make his choice to keep using a product or service from a company. Attitude determines the selection and also to make a commitment to repurchase the company's (Foster and Cadogan, 2000). According to Wulf et al. (2001) loyalty is the amount of consumer loyalty and frequency of purchases made by a customer of a company. The authors managed to find that the quality of integration consisting of satisfaction, trust and commitment has a positive relationship with loyalty. Lamb et al. (2004) investigated the relationship between the received satisfactions and customer loyalty. Results achieved an important justification as the reference that the relationship of customer satisfaction, with customer loyalty is positive.

According to Oliver (1997), the variable of fidelity has four dimensions, among others:

1. Cognitive loyalty is about the perceptions about the ability to assess the bank at a glance with the following indicators: (a) Knowing that when selecting and assessing a bank is a fetching the right decision. (b) Assess that the ability of the selected bank is the best.

2. Affective loyalty implies the customer perception regarding the election to use the bank with the following indicators: (a) Using the services and facilities provided. (b) Liking all the activities provided.

3. Conative loyalty represents the perception of consumers regarding the action to continue using the bank with the following indicators: (a) Always stay would choose a bank. (b) The repurchase.

4. Action loyalty represents the opinion of the customers on the action to continue using the bank with a higher commitment with the following indicators: (a) Provide positive information to others. (b) No change in other banks.

2.4 Relationship Between Variables and Hypotheses

H1: There is influence of service quality on customer satisfaction at PT. BNI (Persero) Tbk. In Aceh Province.

H2: There is influence of service quality to customer loyalty at PT. BNI (Persero) Tbk. In Aceh Province.

According to Calik and Balta (2006) states that customer satisfaction and loyalty is the effect of receiving the quality of service performed by an organization. Suhartanto (2001) finds that customer satisfaction will affect consumer behavior to recommend others, encourage friends or friends to, do business with, consider as an option, first if you want to buy similar services, buy services in the future and inform the good things from to others. Hypotheses that can be submitted are:

H3: There is influence of customer satisfaction to customer loyalty at PT. BNI (Persero) Tbk. In Aceh Province.

The aim of this study is to understand the influence of service quality toward customer satisfaction and its implication on customer loyalty at PT. BNI (Persero) Aceh Province. The cluster and convenience sampling technique were used for this study. Respondents were customers visiting the counters of banks and they must have an account with PT. BNI (Persero) operating all branches in Aceh, namely the branches of Banda Aceh, Lhokseumawe, Sigli, Bireuen, Meulaboh, and Langsa. The data were collected from personal interviews using questionnaires.

Table 1 reports the descriptive statistics of respondents in this study. A total of 250 questioners were distributed and 210 were returned (84 percent response rate). The characteristic includes 119 male customers (56.7 percent) and 91 female customers (43.3 percent). The dominantly respondents age is 21 – 30 years (33 percent) and works as Government employee (33.8 percent).

Confirmatory Factor Analysis test is conducted with a purpose to know the ability level of an instrument or tool for collecting data by expressing main target of measurement. The CFA test in this research is divided into two types, namely exogenous constructs and endogenous constructs. There is one exogenous variable, namely service quality consisting of five dimensions, namely tangible, empathy, reliability, responsiveness and assurance.

The endogenous construct in this research consists of two variables, namely customer satisfaction and customer loyalty. The satisfaction has four valid indicators. The loyalty has seven indicators but after being analysed it has only five forming indicators.

The testing of the structural model is conducted in two stages. The first stage implies exploring the extent of the formed basic model in this research to meet the goodness of fit criteria so that the model can describe on the research phenomena. The second stage shows the ideal model through modification indices. Both models can be seen in figures 2 and 3, and tables 2 and 3. 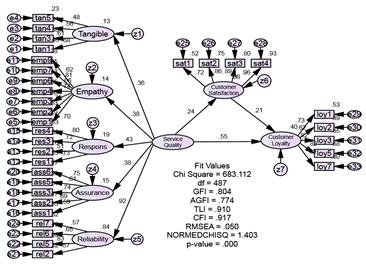 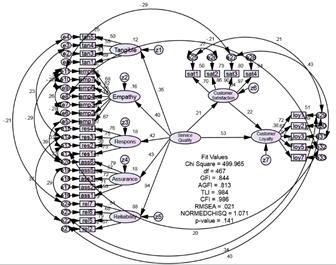 Figure 2. SEM results for the Model with Modification Indices

Table 3. SEM results for the Model with Modification Indices

The basic model has yet to meet the criteria of model properness, among others from the GFI, AGFI, TLI, CFI and P-Value values. There are only a good criteria in Chi Square, RMSEA and CMIN. This model can yet represent the phenomena in banking industry in Aceh Province. The second model is the modification indices, this model shows that the criteria have meet although there are two requirements with marginal values, (rather good), namely GFI and AGFI. The CMIN and P-Value values are the main requirements that have to be met in this model.

The mediator variable model is introduced by Baron and Kenny (1986). Baron and Kenny described the procedure of mediated variable analysis in a simple manner through regression. The analysis path in this research can be seen in the following figure.

Figure 4. Mediated Model for this research

These research results can provide various implication, both theoretically and practically. The research results obtained show positive and significant effects of service quality on customer satisfaction and customer loyalty, and customer satisfaction can partially mediate the relationship between service quality and customer loyalty for PT. BNI (Persero) Tbk Aceh Province. Based on the theory expressed by Parasuraman et al. (1994); Lupiyoadi and Hamdani (2011) said that the quality of service has an essential importance for the company's strategy to defend itself and achieve success in the face of competition.

Although there is a good service quality provided by the banks in Aceh province, as perceived by their customers, it is necessary for companies to keep maintaining and improving the service quality, mainly in empathy dimension by improving employees’ knowledge and capability. Meanwhile to improve the credibility, it can be by providing training and education concerning sharia product and service comprehension so that it can improve customer satisfaction. Although there is high customer satisfaction banks in Aceh Province, the bank party should keep maintaining the commitment by creating Internet Information technology application that can be accessed easily for banking transactions. The use of this information technology innovation can improve duration of correlation between the banking and customers. To maintain and improve customer loyalty, companies should update and utilize their facilities optimally to prevent any disappointment in providing services and improve repeated purchase on products and services in Aceh Province.

© 2017 The Authors. Published by Sprint Investify. ISSN 2359-7712. This article is licensed under a Creative Commons Attribution 4.0 International License.